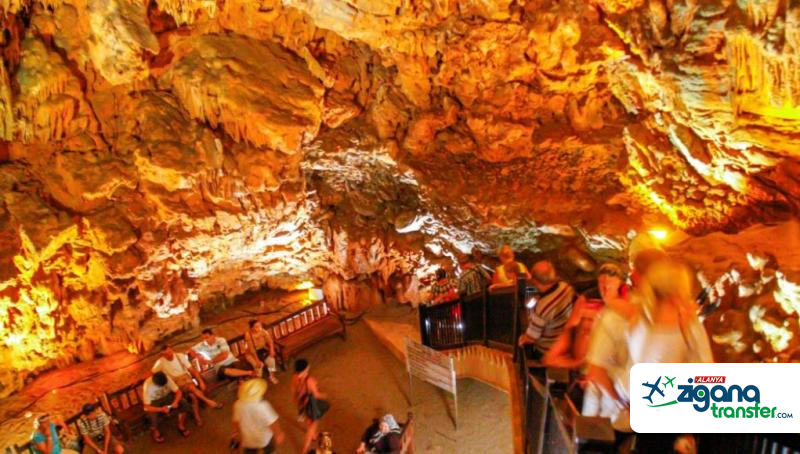 When you say Alanya, two caves come to mind. Dim cave and Damlatas cave. Due to its location, Damlataş Cave is the most famous and most visited cave of Alanya. It is named as "Damlataş" because of the columns formed by stalactites and stalagmites inside the cave.

Damlatas Cave was found by chance in the construction of the ferry port in 1948 and taken under protection. Is the first cave opened in Turkey's tourism. It is estimated that the cave was formed in 10-15 thousand years. The rainy area played an important role in the formation of the cave. Since the gas contained in the rainwater dissolves carbonated water and limestone, large voids have formed. The waters dripping down, frozen and formed stalactites and stalagmites in thousands of years.

As soon as you enter the cave, a 45-50 m passage, 14 m. in diameter and 15 m. a gap of height and columns are encountered. The two-storey cavity of the cave contains 2500 cubic meters of air and its internal temperature is 22.3 degrees in summer and winter. Since the thickness around it reaches 10 m, there is no possibility of collapse. In addition, the cave contains 8-10 times the usual carbon dioxide, high humidity, low radioactivity is used for the treatment of asthma.

Damlatas cave is not only a tourist but also a healing cave. For asthmatics, the cave opens specially every day between 06.00-10.00. Treatment of asthma patients takes 21 days. During this process, breathing exercises are performed.

Where is Damlatas Cave, How to Go?

You can easily go to Damlataş Cave, located in Alanya district of Antalya, by Alanya buses from Antalya Bus Terminal. You can take the direct buses from Antalya airport or from the main road to Alanya buses. It takes 2 hours by bus from Antalya to Alanya. Dolmies move from Alanya center to Alanya castle. The cave is located to the right of the ramp leading up to the castle, next to the Cleopatra beach. You can buy a ticket from the tefer station next to the Damlataş cave and go to the castle accompanied by a delicious Alanya cruise.