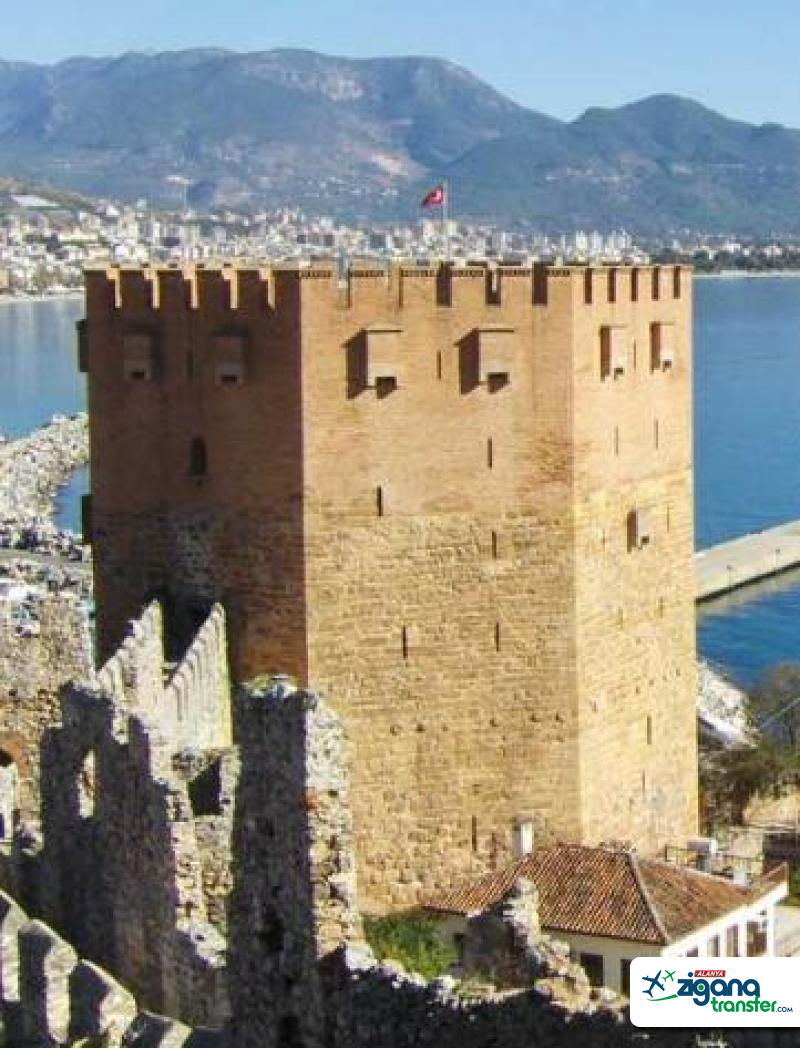 Kızılkule, which is a unique example of 13th century medieval Mediterranean defense structures; It was built by the Seljuk ruler Alaaddin Keykubat to builder of Aleppo Abu Ali Reha el Kettani in order to protect the harbor, shipyard and Alanya Castle against attacks from the sea.

Kızılkule; It attracted attention with its imposing appearance in the past as well as today and has taken its place in many books. Evliya Çelebi, a 17th century traveler; It states that Alanya Castle has a solid eight-corner tower on the sea side, this tower took 2000 men during the siege, and the second castle guard sitting here had 40 soldiers.

On the outer north wall surface of the building, there is a four-line construction inscription written on behalf of Alaaddin Keykubat, 10 meters above the ground and under construction, and another building inscription on the south wall. The name of the master who built the building is indicated in the master inscription on the wall to the right of the entrance door. A total of 56 battlements on the facades of Kızılkule; There are 22 boiling pitches and water pouring openings and 6 buns, which are lined up in order to make the enemy repelled with boiling pitch and water and make it impossible to escape.

Having an octagonal plan, Kızılkule has a complex plan inside, unlike its plain exterior. Kızılkule; It has five floors: ground floor, first floor, mezzanine floor, open floor and open terrace.

Contrary to the imposing appearance of the building, probably due to military purposes, the ground floor is reached through a small and unpretentious entrance door and a narrow corridor. A vaulted corridor surrounds the octagonal elephant foot in the center. According to İbrahim Hakkı Konyalı, in the early times of the building, there were wooden flat rooms on the ground and first floors that stretched from the beginning of the corridor vault to the upper covering and whose traces can only be seen today for the castle guards to lie down and rest. The ground floor is used as exhibition space today.

A large water cistern was placed on the upper part of the foot in the center of the 1st floor, which is reached by a high stone step ladder. The mouth of the cistern, which still works today, is on the open floor.

A ventilation shaft is placed at the base of the corridor close to the cistern, in the middle of the octagonal edges. The door on the northwest of the floor, which is used as an exhibition space, opens to the outer walls. A large ship graffiti can be seen on the city wall on the right.

The mezzanine floor, which is in the form of a narrow corridor, has boiling pitch and water pouring openings.

In the middle of the open terrace, there are a total of 16 ventilation shafts in two rows in the mouth of the cistern and around it. The light entering through these chimneys reaches the first floor.